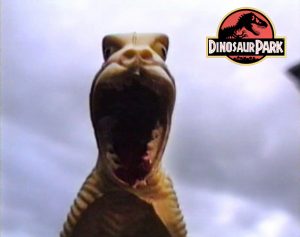 I’ve been making films for as long as I can remember, starting out shooting all sorts of random stuff with my cousin. There were slasher films that had endless sequels, our dinosaur epic, Dinosaur Park, that had its thunder totally stolen by a Steven Spielberg film that came out that same year (what are the chances??), and there was The Library, the place where if you had a book overdue they’d send an assassin out to kill you. And then there were the Monkey films, the best of which was The Day The Monkey Fell. Don’t ask me to explain it… It had its origins in a sketch with Harold Bishop from Neighbours, had characters all named after lyrics from a song by The Doors, and was set on an alien planet. It made no sense whatsoever but it was a big hit. In our minds, I mean.

Shadows of a Stranger 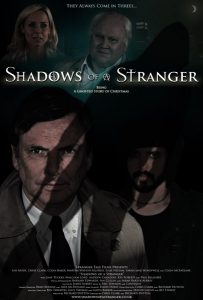 Things did get better though. I carried on making films, and produced two features during my university days, one of which was even shown on a Sky TV Channel. Around that time, my ideas were becoming much bigger than what I could independently produce in humble Lincolnshire on a negligible budget, so that’s when I started writing ‘big production’ film scripts and sent them out to agents and other producers who could give them the professional input they required. However, that didn’t really lead anywhere, and in the meantime I got back to producing low budget independent films with a local director. When those two projects were both shelved, a collaborator friend of mine, Chris Clark, read one of my old scripts, Shadows of a Stranger, and said we should go ahead and make it ourselves. It was written as a thriller set in a big city, not a rural market town like Sleaford where we live. But Chris had a plan: we would film it all on blue screen, like they did with Sin City, and we would build all of our environments in post production, creating our own comic book styled setting. 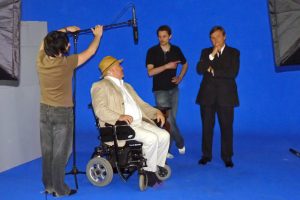 So that’s exactly what we did, building our own studio in a farmer’s barn somewhere down the fen. We held local auditions at the NCCD, attracting numerous talents from our town who were all eager to be involved. And then we started getting professional actors involved who were attracted to our ambition and vision. Taking roles in the film were Colin Baker who was the sixth Doctor in a certain well known BBC show, Sarah Jane Honeywell who was a big personality on CBBC, Malcolm ‘Bungle’ Lord, and Jane of Rainbow fame. Later on when we were looking for a voice actor, we contacted Hollywood actor Colin McFarlane, and he too came aboard the project. We also shot some pickups a year after the main shoot with Barnaby Edwards who’s found inside daleks in Doctor Who, and long standing TV star Ian cullen.

We’d spent a wonderful summer in that fen barn during 2010 when we shot the film, and it continued to be a thoroughly amazing journey in post production… and that was a process that lasted a tad longer than we anticipated. With a film two hours in length requiring special effects work for every shot, and only two people to do that work, it was a while before we had a finished film. But in September 2014 we were finally able to unveil our masterpiece to cast, crew and media at the Odeon Cinema in Lincoln.

Shadows of a Stranger was released in August 2017 and is available to watch right now on Amazon Video!

So after producing a feature length special effects epic that took 5 years to make, where do you go from there?

Neither of us would pretend that undergoing such a project won’t take it out of you somewhat. Jumping into another major film project wasn’t something we were going to do lightly. Since the completion of Shadows, our small filmmaking network has stayed together and between us we’ve made various Youtube videos and music videos while we took a break from feature length productions.

I have continued to write film scripts, and more recently we collectively conceived a story for a low budget horror film that we could shoot locally. The script for that is written, and we even created a pitch video featuring yours truly. Some scenes were shot for it in 2017 and right now we’re itching to get the cameras out again.