Recently I had the honour of being involved with another Christmas song project. You may remember that six years ago my friend and fellow filmmaker Chris Clark released his Christmas song, Christmas Number One. On that occasion, myself and our friend Ben went into town one morning and filmed Chris prancing up and down the Sleaford high street as he serenaded the bemused townsfolk with his festive tune.

Well, this year he wrote another Christmas song, this time for a Sleaford primary school, The William Alvey. It’s a certain school that I once attended so I have a bit of a soft spot for the place. 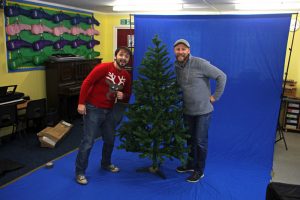 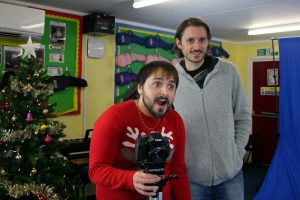 At the end of November myself, Chris and ‘Deck the Halls’ Dan dusted off our blue screen studio and began work on a music video, filming members of the ‘Christmas Club Choir’ in such set pieces as riding a guinea pig-drawn sleigh and hopping on board the William Alvey Express train. The song was released on Amazon and iTunes at the start of December, just after the kids performed the song at our town’s Christmas Market. Since then it has gone on to feature on our local radio stations (Rob Hammond of Lincs FM is going to play it in full on Christmas Eve!) and after making a bit of noise, BBC Look North even came over to film a piece on it.

Instead of going for Christmas number one, the hope was more realistic this time as the aim was just to get the single to chart inside the Top 100. The town has really got behind it, inviting the children to perform it at various events and at supermarkets and churches. It has even had some celebrity support with TV stars like Andy Crane tweeting it. You just need to look at the reviews on Amazon to see the reaction it’s got from people and with proceeds of the song going to children’s charities and future projects, the children really have done so amazingly.

On the first filming day I said to Chris that I may as well film a bit of behind the scenes material while we were at it. I didn’t have anything particular in mind and didn’t plan it or anything. When I came to editing it, I didn’t realise quite how much material I had. We’d had such a fun time making the music video and the kids were just so full of exuberance that it was a joy to see the process unfold and so I had just kept on filming. I managed to come up with a 23 minute edit which I thought was rather long but somehow it scored about 1000 hits after a week of being uploaded. It just goes to show what a joyous project it was and I am pleased that I was able to capture it.

So please check out the music video and the ‘making of’ documentary (and also the Look North report). See if you can spot one of our Shadows of a Stranger locations in the video!

So maybe the kids didn’t quite make it into the charts but it wasn’t despite our best efforts, campaigning the likes of Radio 2’s Chris Evans, and Chris tweeting every celebrity in existence. I even sought advice from that guy who got Rage Against the Machine to the top spot ahead of the latest X Factor winner. The William Alvey kids did actually hang on to some high positions in the Amazon charts for a while, beating off the likes of Sam Smith and Ed Sheeran, but whatever. I’m sure it’s going to be on a lot of Sleafordians’ playlists for many Christmases to come. And who knows? Perhaps next year we might be back with another Christmas song…

1 thought on “The Return of the Red Jumper”