My new Jospeh Kiel book is out now! This one marks a change in creative direction for me as there are NO 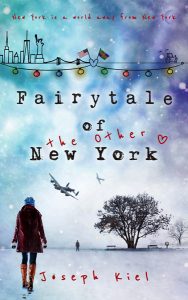 supernatural creatures in this one and absolutely NO ONE gets murdered. It’s also the first book I’ve written that is set in the real world. ‘Write what you know’ is often the advice given to authors. Well, I figured I know my home county of Lincolnshire having lived here for over thirty years, and I know about about the film industry, so why not combine the two?

Fairytale is about a London film critic who returns to the Shire to care for her ailing grandmother (again, this was something I drew on from personal experience). Hazel Nightingale, my main character, signs up to be an extra in a war film that Hollywood is shooting in nearby Woodhall Spa. The male lead is a movie star heartthrob that Hazel has a thing for, and fate keeps bringing the two of them together… 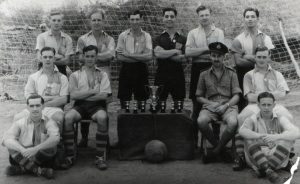 The 353 Squadron football team, my grandfather Joseph on the back row, second from right. Joseph would play in some big matches during the war, lining up alongside some top players

I might have completed this book earlier in the year, but something caused me to go off on a tangent which ended up turning the book into a double feature, a factual section to go alongside my fiction. That’s the thing with researching your family history; it can get a tad addictive! As my characters were making a film about the RAF and the Second World War, I looked to my two grandfathers’ lives as they both served in the RAF during the war. And what fascinating material I found.

I once worked on a family history scheme run in schools by a friend of mine. Making History was dreamt up by actor Colin McFarlane of Outlander and Batman Begins fame. One thing he continued to impress on the children doing the project was to carry out this research at a young age.

I wish that I had done more of that myself now. As I investigated what my grandparents did during the war for my book, it took me a while to piece together what I could from the evidence I uncovered: photographs, RAF papers, letters, items from the war, the hazy memories I had of them talking about the war. So many photographs made me wonder what the context was. I really would have liked to ask them what they were feeling at the time, too. 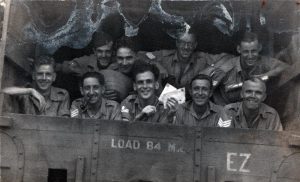 My maternal grandfather John (smoking the pipe) with his RAF buddies. I don’t recognise any of these other men here, but there was one photograph John took where there was no mistaking the identity of the man in it…

I studied many of these photographs closely, trying to put myself there, getting myself in tune with the emotions they were feeling in those moments. My maternal grandfather put together two albums filled with photographs of all the places he went with the RAF. The underlying subtext to all this was that this period of his life was clearly something that meant a lot to him. He obviously felt a need to document and preserve what he’d gone through. Whether he ever conceived of his grandson going through all his photographs decades in the future and publishing them in a book one day, who knows, but I suspect that he may have hoped that someone may have made something of them in the future.

Both my grandfathers had fascinating stories relating to the war. That was the tagline of the Making History scheme: Everybody Has a Story. And it sure was the case with my grandparents. Between them all they ticked so many boxes: glory, tragedy, romance, encounters with luminaries, and that’s why I felt compelled to write about these tales in my book.

Fairytale of the Other New York is available on Amazon in ebook, paperback and hardback form. It is also part of Kindle Unlimited.