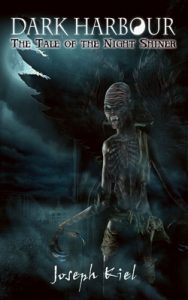 My new novel has now been published! A follow up to the book I released last year, and the second book of the Dark Harbour Tales, The Tale of the Night Shiner is about a brutal supernatural creature that is haunting the town and killing off all the losers and the wasters. Our antiheroes at the local vigilante organisation, Halo of Fires, are called upon to somehow succeed at the impossible task and slay the beast, but they’re not so keen to take on the job as they’re busy chasing down abusers and bad boys themselves. So yeah, a real feel-good story as you can tell.

The book is a cross between the legend of Spring-Heeled Jack and one of my all-time favourite films, Jaws, and I think it’s an even better read than my first book. A lot of the original characters return for the sequel, with even more twists and turns and surprises to be revealed. The series takes an even darker tone in this installment, so it’s a definite Empire Strikes Back of the trilogy.

Anyway, please check it out, even if you haven’t read the first one. I really think it’s the best thing I’ve ever written and I’m looking forward to hearing people’s thoughts on it. 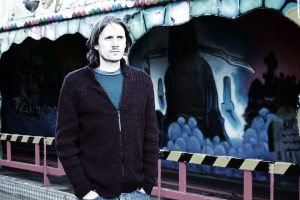 Recently I also recreated my author profile photograph as I stood beside a ghost train in a certain seaside town… Okay, yeah it wasn’t Dark Harbour because there is no such place (in our dimension), but can you guess where I am? It’s a certain resort that has inspired this series of books, and I make one or two oblique references to it. Clue: there used to be a cool helter skelter there.

1 thought on “The Tale of the Night Shiner”